Yesterday, it was announced that David Crosby, 81, had passed away. A man whose antics were as legendary as his music and the world began to realize they lost a legend: 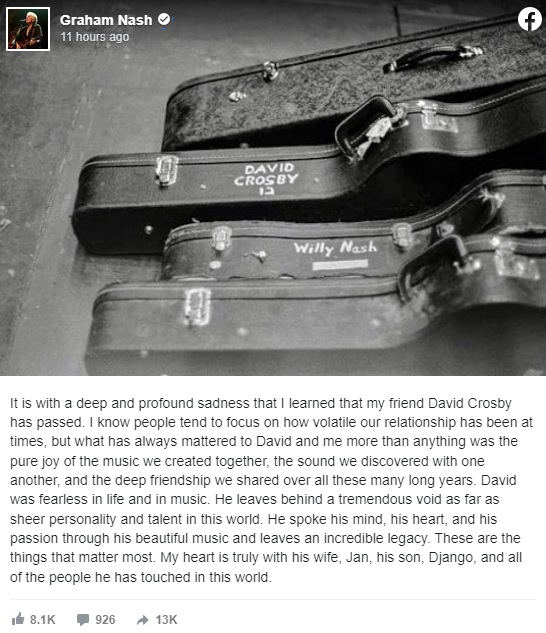 I don’t know what to say other than I’m heartbroken to hear about David Crosby. David was an unbelievable talent – such a great singer and songwriter. And a wonderful person. I just am at a loss for words. Love & Mercy to David’s family and friends. Love, Brian pic.twitter.com/Hjht7LeGiv

I am grieving the loss of my friend and Bailey’s biological father, David. He gave me the gift of family. I will forever be grateful to him, Django, and Jan. His music and legacy will inspire many generations to come. A true treasure. pic.twitter.com/1e0vbvd2SN

We sang together, we played together and had great times together.
I'll miss The Croz more than words can say.
Sail on. pic.twitter.com/Lc6pui2rCX

RIP David Crosby. I sang so many of his songs when BTO was a bar band. I thought he was a great songwriter and was amazed at how he survived his turbulent years and kept on making music. He will be missed by millions and his loved ones. #rip #davidcrosbyhttps://t.co/Ii7bBVWp3L

To the family of @thedavidcrosby – my condolences, thoughts & prayers go out to you. We lost an icon and legend today. It’s been a very sobering few weeks with the loss of so many people. It puts a real emphasis on “live your life to the fullest.”

RIP to a music icon.